As a tandem skydiving instructor, I’ve gone on thousands of jumps in my lifetime. However, on May 22, I had the good fortune to exit an airplane at 10,000 feet over our nation’s capital with US Army Ranger SFC Leroy Petry attached to me in tandem. Sergeant Petry is a Medal of Honor recipient who was wounded in combat while serving in Afghanistan. The jump was part of an event that was hosted by the GE Veterans Support Group. As Segue provides IT support for the various branches of the military, it was a great experience to support this event and be reminded of the sacrifices made by our soldiers in combat. As a member of Team Fastrax Professional Skydiving Team, I am often called upon to support veteran and Wounded Warrior events.

Sergeant Petry and I exited the plane on the first pass, kicking off the team performance. The plane made a second pass at 6,000 feet with Dana Bowman, another wounded veteran, and other members of Team Fastrax jumping along with numerous large U.S. Flags, creating a fantastic aerial display. During the fall, a majestic view of Reagan National Airport, the Potomac River and the National Mall served as our backdrop. Everyone landed safely in a 100 x 100 foot area of turf in front of the Gaylord National Resort and Convention Center. Following the jump, the USMC Honor Guard wowed the crowd with impressive display of drill team precision.

Ranger Petry protected his Ranger unit in combat through selfless and heroic action; his Medal of Honor citation is included below. When asked if he had any regrets, he said “I wish I would have grabbed the grenade with my left hand.” Leroy is a class act, and the only Medal of Honor recipient still on active duty.

Other Segue Technologies® personnel came out to watch the jump including CEO Brian Callahan, Managing Director of Segue Health Peggy McShane and Sales Associate Chris Behrmann. Brian and I served in the same US Army 75th Ranger Regiment, in which Ranger Petry currently serves.

For conspicuous gallantry and intrepidity at the risk of his life above and beyond the call of duty: Staff Sergeant Leroy A. Petry distinguished himself by acts of gallantry and intrepidity at the risk of his life above and beyond the call of duty in action with an armed enemy in the vicinity of Paktya Province, Afghanistan, on May 26, 2008. As a Weapons Squad Leader with D Company, 2nd Battalion, 75th Ranger Regiment, Staff Sergeant Petry moved to clear the courtyard of a house that potentially contained high-value combatants. While crossing the courtyard, Staff Sergeant Petry and another Ranger were engaged and wounded by automatic weapons fire from enemy fighters. Still under enemy fire, and wounded in both legs, Staff Sergeant Petry led the other Ranger to cover. He then reported the situation and engaged the enemy with a hand grenade, providing suppression as another Ranger moved to his position. The enemy quickly responded by maneuvering closer and throwing grenades. The first grenade explosion knocked his two fellow Rangers to the ground and wounded both with shrapnel. A second grenade then landed only a few feet away from them. Instantly realizing the danger, Staff Sergeant Petry, unhesitatingly and with complete disregard for his safety, deliberately and selflessly moved forward, picked up the grenade, and in an effort to clear the immediate threat, threw the grenade away from his fellow Rangers. As he was releasing the grenade it detonated, amputating his right hand at the wrist and further injuring him with multiple shrapnel wounds. Although picking up and throwing the live grenade grievously wounded Staff Sergeant Petry, his gallant act undeniably saved his fellow Rangers from being severely wounded or killed. Despite the severity of his wounds, Staff Sergeant Petry continued to maintain the presence of mind to place a tourniquet on his right wrist before communicating the situation by radio in order to coordinate support for himself and his fellow wounded Rangers. Staff Sergeant Petry’s extraordinary heroism and devotion to duty are in keeping with the highest traditions of military service, and reflect great credit upon himself, the 75th Ranger Regiment, and the United States Army. 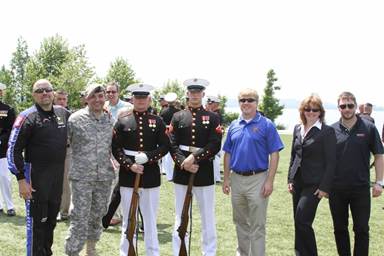