As a fellow Android application developer in a cross-platform shop, a recent blog post by Ian G. Clifton, The Negative Impact Of iOS On Android, certainly hit home with me. The basic concept of the article is that in the world of mobile application development, while iOS and Android have had a healthy competitive relationship that has driven innovation, iOS has somehow taken on the role of being the “standard” platform. Thus, applications are being written and specified using iOS, which has the negative consequence of holding back applications on the Android side. I’ve experienced many of these same frustrations myself, along with the added pain of dealing with third-party designers (in the past) that designers that are only versed on iOS and haven’t digested the Android Design site. 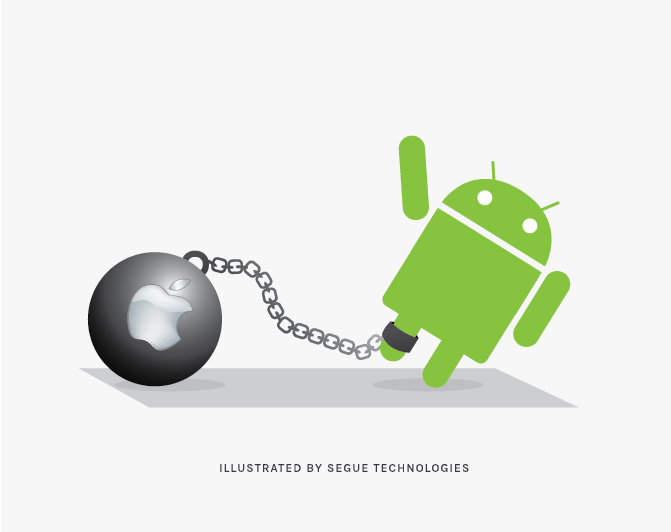 While I do think Apple has recently started to move at a slower pace, the competition between the two platforms remains healthy and has driven both companies forward. This is a good thing… no, a great thing, for users! I honestly consider the issues in the article more as differences rather than deficiencies in iOS. I also believe that there are areas where Android certainly needs to play catch-up. Take, for example, the Apple Maps API that allows for displaying turn-by-turn directions, whereas the Google Maps API does not (leaving out the other debates surrounding Apple Maps).

But it’s the last line of the blog that sums everything up for me: regardless of what platform you’re on,  “Don’t let a desire for the lowest common denominator harm your app.” A poor quality, “lowest common denominator” port serves no one. It won’t meet your users’ expectations and could ultimately damage your reputation. Android and iOS users expect different things – from design details to features.  Give them what they want, what they crave – the best experience your app can offer on their platform of choice – and you might even turn them from users into fans.

Of course, that means redesigning the navigation, the interaction design, and to some degree the visual design, as well as reimagining feature implementations. If you’re not familiar with a particular platform, this can seem like a daunting task. It certainly can’t hurt to have someone that’s current on all the tools, trends, patterns and designs in your corner, now, could it?