Written by The Segue Quality Control Team on August 14, 2015 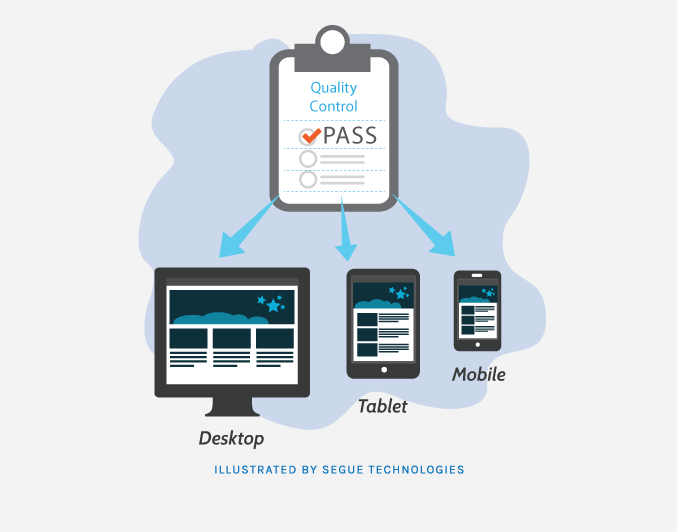 Responsive testing is short-hand for solving responsive web design problems through multi-level testing. Tests focus on compatibility with multiple devices, display sizes, and running systems. But responsive testing is not as easy as it sounds. At Segue Technologies, we integrate quality control points at every stage of implementation. Integrating responsive testing at each point along the way, we produce real, measurable results for your company. In order get the most from responsive testing make sure to prioritize, manage your testing time wisely, perform regression testing, utilize automation, and update continuously.

Trying to run responsive testing on an entire system all at once is what Forbes Magazine calls “boiling the ocean” –i.e. taking on too much all at once. With this approach, the details are glossed over, deceptively giving a seemingly perfect picture without fixing the bug.

Let’s start by looking at how end-users are interacting with the system. What kind of device is used the most? What are the browsing and engagement habits of employees and customers? If a website is accessed via iPhones and tablets 70% more than via standard desktop displays, we can easily prioritize our responsive testing toward iPhone compatibility.

Implementing code is easy, fixing code after it has been launched and altered is another thing entirely. Programs learn as they run and programmers often patch issues as they are encountered. This strategy inevitably leads to disaster down the road. The solution is to test code before, during, and directly after deployment. If bugs are found it is far easier to remedy the original code rather than taking apart a code that has become integrated in a running system.

Early detection may be the best prevention, but codes constantly need tweaking down the road. Modifications are re-run through the entire system to see how it interacts with base codes. That is what regression testing is all about and it is a vital component of continuing responsive testing. Effective quality control on all systems doesn’t stop once it is up and running; codes evolve and change as they integrate with other systems. Regression testing is the safety standard for new code implementation.

Responsive updating is as integral to a running system as responsive testing. Data exchanges from developers to systems, and from users to servers are not static engagements. Information sent through an application carries new messages and grows, which is the concept behind continual updating. Automating updates to run simultaneously throughout a system integrates every piece of code and uses the same information in the same way.

Efficient updating programs such as Ajax increase responsiveness by eliminating extraneous data exchanges in favor of a more user-friendly experience.

Every system is as unique as the hundreds of developers who created it and the thousands of users who depend on it. There is no one-size-fits-all to responsive testing. That’s why at Segue Technologies we work with you to develop results-driven testing strategies. Our expertise in testing covers every application – from optimizing for multiple devices, on-site automation, to code development and beyond.