Written by The Segue Quality Control Team on August 25, 2014 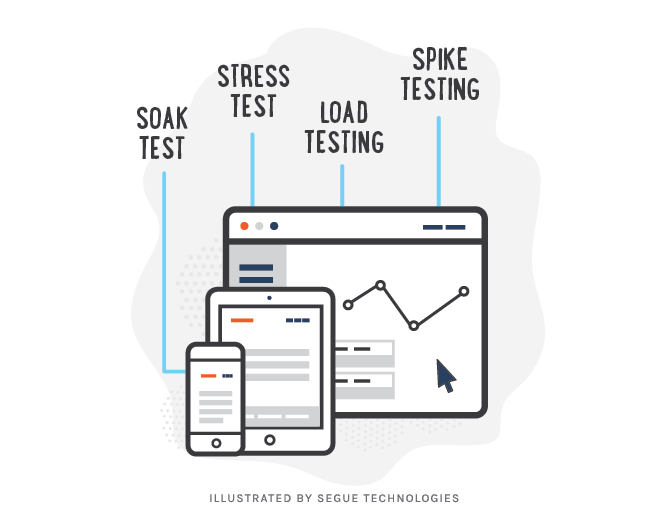 When Should You Use Performance Testing?

The entire process of software performance testing is done to accomplish a set of four goals:

The Types of Software Performance Tests

There are six major types of software performance testing which include load, stress, soak, spike, configuration, and isolation tests.

Load testing is used to study the behavior of the application under specified loads. It also shows how an application will function when the majority of its users are logged in. Load testing is mainly done to measure response times, resource utilization levels, and throughput rates.

A stress test is performed to determine the upper limit of the application capacity and how the application performs when the current load exceeds the expected maximum. The primary focus of performing testing is to identify application bugs that occur in high load conditions. This test determines the maximum load that a given application can support.

Soak tests are performed with the objective of determining how the application endures under a continuous expected load. For example, a soak test can be performed to monitor memory utilization and detect memory leaks and other performance problems that can occur. The objective of performing this type of test is to determine the application’s performance in sustained use.

Spike testing is performed to determine whether a given application has the capacity to sustain the workload. The test is accomplished by increasing the number of end-users by a large amount and assessing the performance of the application overall.

Setting up the environment for performance testing for various applications (web, desktop, mobile) can be time consuming and expensive. We decided to use Neustar’s Web performance service for our testing needs. Please read this case study to learn more about our decision to use Neustar and our experience working with them.

The quality of your website performance is important. People will visit a website less often if it is slower than a close competitor by more than 250 milliseconds (NYTIMES). When you are accessing the quality of your application, be sure to include how well it performs. Your web application’s performance could be the factor that draws a customer to your services instead of a competitor’s.