On August 8th 2013, the Bethesda Chapter of the Armed Forces Communications and Electronics Association (AFCEA) hosted a symposium on Mobile Technology at the Grand Hyatt in Washington D.C.  The event featured several panel discussions and presentations regarding the increase in mobile usage, as well as the ever changing world of mobile technology.The buzzword for the day was a quote from Google’s Eric Schmidt: “If you don’t have a mobile strategy, you don’t have a future strategy.”  Why? Because in 2015, for the first time in history more U.S. consumers will access the internet via mobile devices than PC’s. Plus many government workers have traded in their laptops for tablets when working in the field. Thus, the goal of the symposium was to discuss how the government and businesses can partner to build successful mobile strategies. 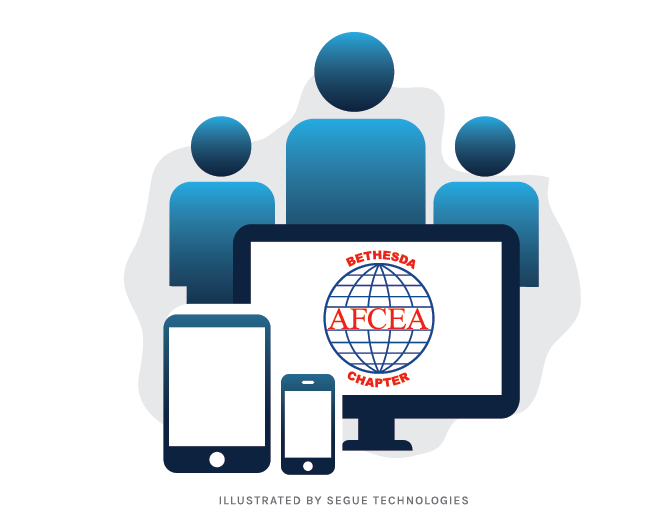 The symposium started with Thom Rubel (IDC Government Insights) providing statistics on the growth in mobile devices and usage and Debrorah Gallagher (U.S. General Services Administration) providing a framework for devising a successful strategy. In general, it is essential to draft mission requirements – the why, who, what, when, and what circumstances – as well as to identify the risks. This includes security where an agency must not only secure the device, but also the data.

There were two panel discussions, one describing the Next Generation of Mobile Technology; and the other Mobile Use Case – Cutting Across Government During Disaster Response. The latter was very informative and described FEMA’s response to Hurricane Sandy, and featured Dr. Jody Ranck discussing the role of citizen scientists and Crisis Mappers in disasters. For instance, in Haiti survivors buried in rubble were able to use their mobile phones to call for assistance, and Crisis Mappers was able to geo-locate those calls for responders.  As for Hurricane Sandy, Karole Johns (FEMA) and Rear Admiral Ron Hewitt (Director of the Office of Emergency Communications, DHS), indicated that LAN mobile was 99% available after Sandy, but 60% of line infrastructure was down.  Thus, the critical question is “how can we fill the gaps?” Increasing bandwidth and charging stations are a priority. Rear Admiral Hewitt believes that bandwidth problems will be partially alleviated by the First Responder Network Authority (FirstNet) which will, “move public safety to the next generation”.

Two of the most important speakers were Dr. Taha Kass-Hout (Chief Information Officer, Food and Drug Administration (FDA), Department of Health and Human Services) and Gary Blohm (Director Army Architecture Integration Center, Chief Information Office /G6, department of the U.S. Army). Both related how their respective departments planned to utilize mobile technologies.  Dr. Kass-Hout expressed the position that, “mobility is about being able to do your business anywhere” and remarked how open data is an essential part of the FDA’s mobile strategy. Not only does the FDA provide data to consumers, but they also utilize data from consumers since, “It’s no longer, you are what you eat. You are what you TWEET.” Thus, the FDA uses crowd sourcing to mine social media, particularly Twitter and Facebook, to identify outbreaks of illnesses. This enables the agency to identify an outbreak and manage resources five to six months earlier than waiting for the information to disseminate from doctors and hospitals to the FDA.

Mr. Blohm concluded the symposium by discussing, “building a Joint Network Architecture for a Mobile Warfighter – which goes beyond email and actual services in the cloud.” According to Blohm, “it’s really about the data and the applications and we need the bandwidth to train multiple units; in multiple locations.” Many of these services are outlined in this FCW article. Blohm believes that a “Device Agnostic Architecture is quite important to engage all wireless carriers” – particularly since individual soldiers favor multiple devices and platforms.

The symposium showed that government agencies are embracing mobile technology and solutions at a rapid pace. The extent of the future use of mobile devices, and the services that the Government will provide is uncertain. What is certain, however, is that the time for innovative technologies, which will enable a more informed user at the point of engagement, is now.