As a system administrator working with the National Park Service (NPS), it’s my job to take care of servers, storage, virtualization, and in-house applications there. Here I am going to talk about an interesting piece of hardware we recently acquired at NPS, a 3PAR 7400. 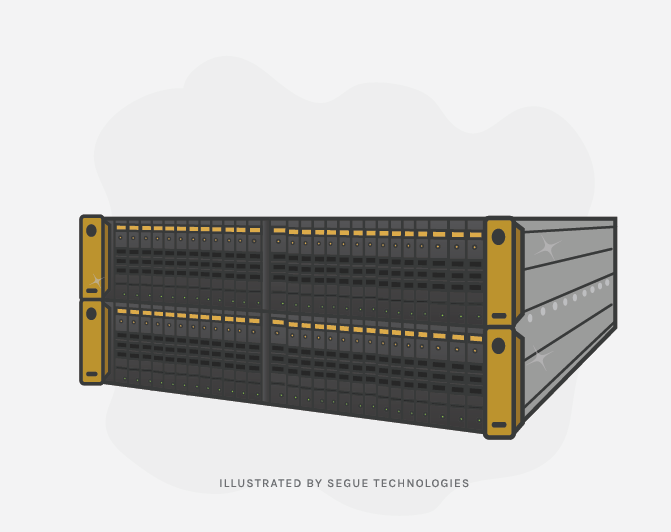 What Flavor of Chunklets Would You Like With Your LUN, Sir?

You think….wait, chunk-what? Yes, the new Storage Area Network (SAN) that we designed and deployed has that curious sounding option. I will explain option in details later but let me start by saying that this SAN is lightning fast!

Currently we have around 70 Virtual machines on this SAN. The SAN is able to handle boot storms like nothing happened. When we need to shut down or boot all 70 VMs at the same time, it usually takes only minutes. For comparison purposes, when the same 70 or so VMs were running on a HP LeftHand 7200 SAN, it sometimes used to take up to two hours for a boot/shutdown storm. Well, let me be fair to the LeftHand… someone configured it with 7200 rpm Large Form Factor (LFF) SAS drives. The 3PAR is running 15000 rpm SFF SAS drives and SFFs are usually faster than LFFs. However, the 3PAR has only 10 drives whereas the LeftHand has 16. LeftHand is also mirrored between two chassis. More spindles equals more speed. In fact, we have a spreadsheet from HP which shows you the relation between spindles and IOPS. It is very interesting to see how quickly a bunch of 10,000 rpm drives can beat 15,000 rpm drives in flat out IOPS.

But wait, I still need to tell you about the “flavors” of Chunklets, which is such a nice feature of these SANs. A chunklet is a 256Mb block of data. By default a 3PAR array will divide all hard disks in chunklets of 256Mb. This means, for example, for a 600Gb drive you’ll have 2400 chunklets (600Gb x 1024Mb / 256Mb). 3PAR SANs allow us to choose what type of chunklets you want – fast or slow. For example, let’s talk about the fast chunklet option. Basically the SAN gives you an option to carve out a LUN from the outer areas of the hard disk platters. Due to the relatively faster tangential speed of the ones and zeros (data) passing below the heads, the read-write speeds are a little faster there. Similarly, a LUN carved from slow chunklets will be cut from the insides of the disks and will be potentially slower. I have seen a noticeable gain in read-write speeds while using a disk that is on a fast chunklets LUN.

Of course everything I have written above is highly simplified. In reality you need to do a little more configuration. However, most of that is a one-time task. I hear that many other mid or high-end SANs also have similar features.

Now, if only I could have a 3PAR SAN at my home, it would look so nice, sitting in my basement serving up all the movies to my TVs….. yeah right….but hey, a guy can dream, right? 😉