Apple kicked off the 2014 Worldwide Developer Conference (today with their annual keynote address, separating the presentation into three areas of focus: OS X, iOS, and Development. Apple has historically split their developer program between their desktop and mobile platforms, but over time it has become apparent that the two are slowly being integrated. Today’s keynote further supports this notion as many expected, and some quite unexpected announcements were made public. 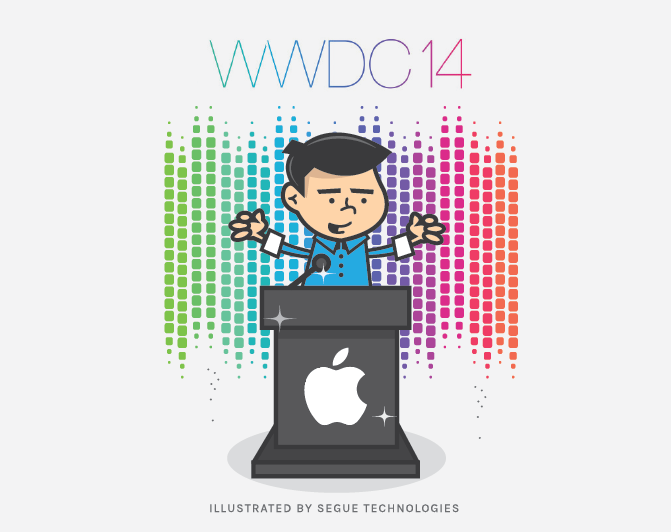 The keynote began with the usual adoption statistics (close to 90% iOS 7 adoption after one year) and development program participation numbers (9 million total developers with the last year seeing the highest annual increase since inception at 47%). The iOS 7 transition figure honestly surprised me. Apple has historically great mobile OS adoption rates, but I had doubts about iOS 7 due to its radical interface update, as outlined in last year’s WWDC blog post. I expected fragmentation between supporters of each interface style, but 90% adoption after one year is astounding and if these numbers are to be believed, users are consistently moving forward and keeping up with the latest technology.

The next iteration of Apple’s desktop operating system ,OS X 10.10 Yosemite, was unveiled first. I won’t spend too much time with the interface and functionality updates since we’re primarily looking at this from a mobile application development perspective, but I do want to highlight some of the continued integration between the mobile and desktop platforms. First is the concept of “Continuity”, which helps unify the platforms. If you receive a phone call on your mobile phone, it will display a notification on your desktop and give you the option to answer your call from an iOS device or your computer. Likewise, if you receive a text message from a non-apple device on your phone, it will also appear on your computer. In addition, Apple is introducing a technology known as “Handoff” which allows you to begin a task on either OS X or iOS and, through device detection, immediately pick up and continue your task on another device.   AirDrop is also now compatible between mobile devices and OS X and iCloud Drive will allow easier file sharing between applications and devices.

From an end user perspective, the next version of Apple’s mobile operating system is less about interface changes and more about increased functionality and user task refinements. Notifications are now interactive and users can take action by pulling down on a notification or dismissing them by swiping up. For instance, if you receive a text message, you could pull down on the notification and answer without having to switch to the messages app. Double clicking on the home button now shows frequently contacted people in addition to background apps. Selecting a contact offers options to contact that individual in several ways, more quickly. The mail app includes enhancements that allow the user to delete with one swipe or mark a message as unread by swiping in the opposite direction. Pictures can now be marked up and annotated during email composition. Spotlight returns information pulled from additional sources and the messages app has been enhanced to allow additional actions on each message thread, including the ability to silence notifications from group messages or remove yourself from the conversation entirely, which is a very welcome change in my opinion. Another nice change for end users is the ability to integrate third party keyboards, which has been a feature desired by many since the iPhone’s introduction.

From a development perspective, the iOS 8 software development kit (SDK) is the biggest release yet. It contains over four thousand new application programming interfaces (APIs) and allows developers to create apps in new and exciting ways. First and foremost is HealthKit, which creates a way for any health apps utilizing this API to share health statistics. It’s a step closer to getting an overall picture of a user’s health, which can have a far reaching impact across the healthcare space and something we here at Segue are deeply interested in. Apple’s new Health app is supposed to offer a composite profile of all this health information, similar to how their Passbook app aggregates ticketing information. The CloudKit API allows developers to store and access app data such as structured data in a database or assets from iCloud for free, with very high limits and could possibly put a dent in services like Parse. CloudKit also allows users to anonymously sign into apps using their AppleIDs without having to share personal information. Several APIs were introduced for game developers, as well as a Touch ID API which allows app developers to use Touch ID for authentication. Finally, apps are now extensible so developers can offer services to other apps in a secure fashion.

One of the biggest unexpected announcements of the entire keynote was the introduction of a new programming language named Swift. It is meant to be faster, safer, more modern, and easier to use without many of the error-prone and difficult aspects of Objective-C. Since it uses the same compiler, it works side by side with existing Objective-C and C code. Introduced alongside this new language are the beta release of Xcode 6, the integrated development environment used for coding applications for iOS and OS X, and interactive playgrounds for analyzing the results of Swift coding in real-time as you develop.

With Apple’s recent acquisition of TestFlight, beta builds can be distributed to testers through a new interface, although this feature wasn’t shown in great detail during the keynote. Our mobile development team at Segue has used TestFlight with great success for several years now, so it will be interesting to see what Apple does with it. On the distribution end within iTunesConnect, apps can now be sold as bundles so it will be possible to offer discounts to purchasers buying several of your apps and in addition to app screenshots, short videos showcasing features of your app can be posted to your app’s listing in the app store.

While many of the exact details of each feature were beyond the scope of today’s Keynote presentation, as the week progresses and information becomes available, we will continue to post and discuss as much information as we can. 2014 is shaping up to be a very exciting year for Apple developers!