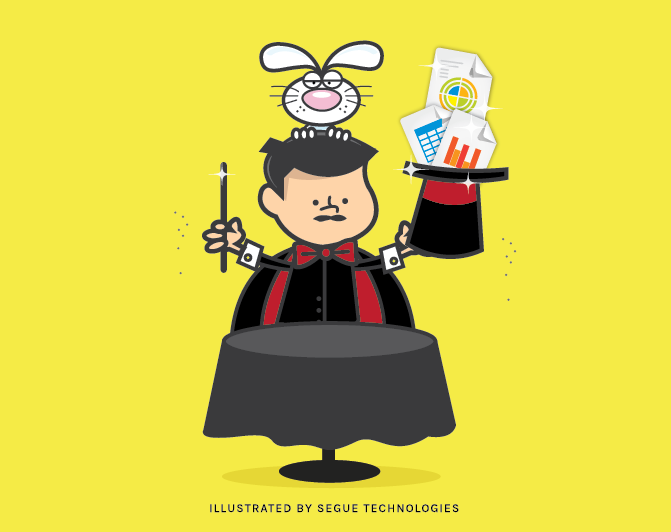 If you are a user of Seapine Software’s TestTrack® tool, the work you do in your software development projects generally follows some sort of pre-defined workflow. This workflow usually has a starting point, one or more sets of software work-related events and outcomes, and eventually reaches some ending point. This flow of events and outcomes may take different paths from start to finish, depending on the type of work being done and the success of the work done along the way. In this article, we will look at the original work and rework involved to complete a TestTrack-managed software development task, define some TestTrack metrics you may use to assess the level of effort you have spent on these tasks, and provide examples of TestTrack’s Live Chart graphical reports you may generate to display and use this information.

Software development tasks in a TestTrack project typically include development of new features, changes to existing features, and fixing reported feature defects. The journey from start to finish for these tasks may follow different paths described in terms of time spent doing two types of work: original work and rework. Original work in this context is a metric which assesses how much initial (e.g., original) time/effort was spent to develop/change/fix/verify a feature. Rework is a metric which assesses how much repeat (e.g., ‘rework’) time/effort was spent to complete a currently-open-and-active, or a previously-closed-and-reopened, feature/change/defect.

The following examples illustrate where original work and rework may play a role in your TestTrack workflow. Rework activity in each example is highlighted in red. The first highlighted rework event in each example is the rework-trigger event. In the example labeled Rework Scenario 1 it is the “Re-Open” event. The example labeled Rework Scenario 4 has two Fix events: the first Fix event is part of original work; the rework-trigger event is the “Remove Fix “event, making the second Fix event part of rework.

Rework Scenario 4: Original Work and Rework: Remove a Fix from a Ticket

In a previous article, Create Customized TestTrack Metrics to Better Manage Software Projects we looked at how you can configure TestTrack workflow events to include time-tracking fields for the estimated and actual time to work on a TestTrack item such as a Feature Implementation, Change Request, or Product Defect Ticket. We also looked at how you can define customized metrics to assess these work-related times and how you can use TestTrack’s Live Chart report feature to display and assess this time-tracking information.

TestTrack calculated custom field formulas use the ECMAScript language, which is a subset of JavaScript. If you are not familiar with ECMAScript, refer to the ECMA-262 Standard Language Specification for information. You may also find descriptions of these formulas in Appendix F: Calculated Custom Field Functions, in the TestTrack User Guide (Version 2013.1 or later), or in TestTrack 2014 online Help topic: Reference: Calculated Custom Field Functions.

With these workflow metrics in place, you can now generate Live Chart (or other) reports to examine the amount of original work and rework performed for your software project.

The following Live Chart report displays the number and type of rework-trigger events for TestTrack Tickets requiring rework. In this example, four events are defined to be rework-trigger events: Re-Open, Remove Fix, Verify (Rework), and Customer Verify (Rework). Most of the Tickets in the report show only one round of rework activity, but some required multiple rounds of rework. Ticket 19 underwent three rounds of rework activity, each triggered by a “Remove Fix” event, before finally reaching satisfactory closure. Ticket 31 underwent five rounds of rework, triggered by a “Re-Open” event, two “Verify Rework” events, and two “Customer Verify Rework” events. 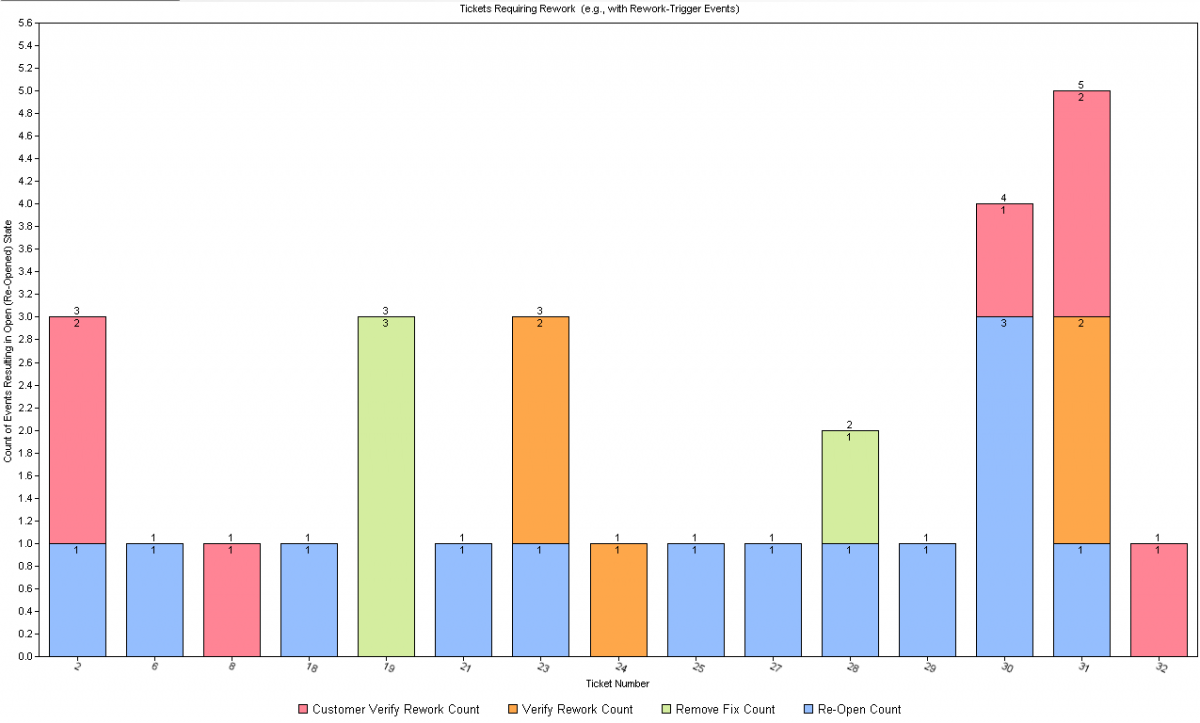 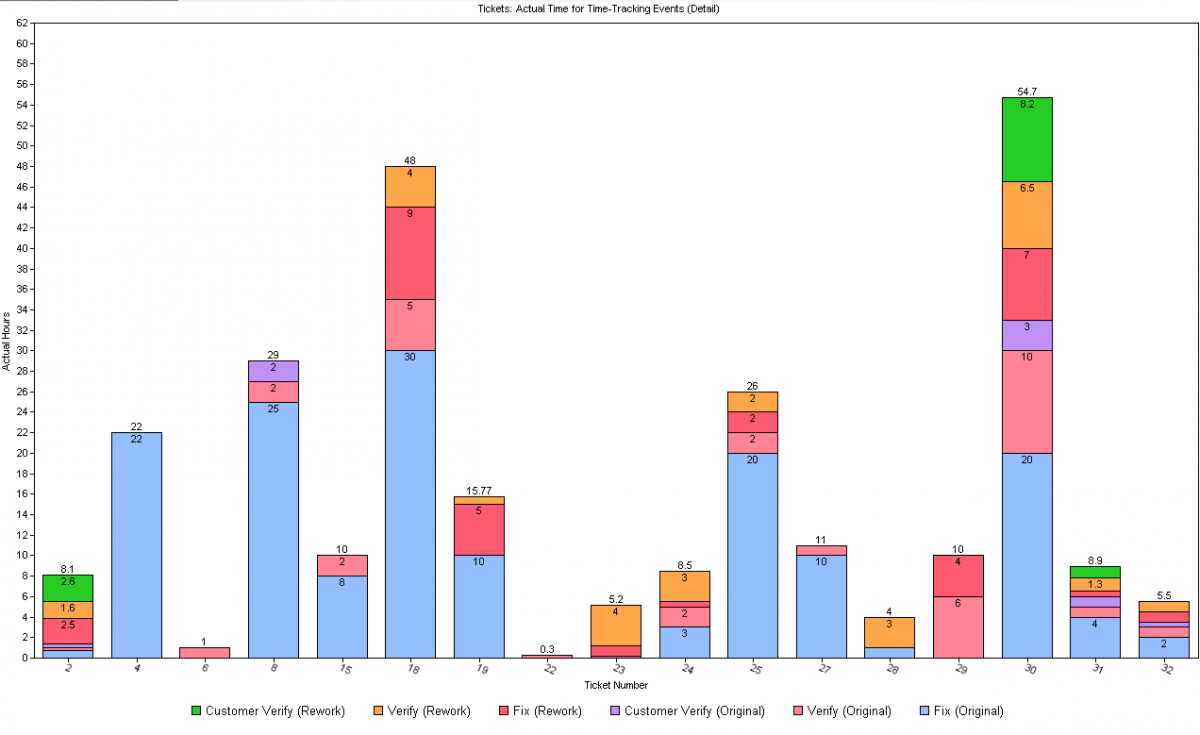 The following Live Chart report shows the percentage of actual work due to original work and rework for Tickets. From this display you can quickly see that most of the effort for Ticket 23 was spent on rework. 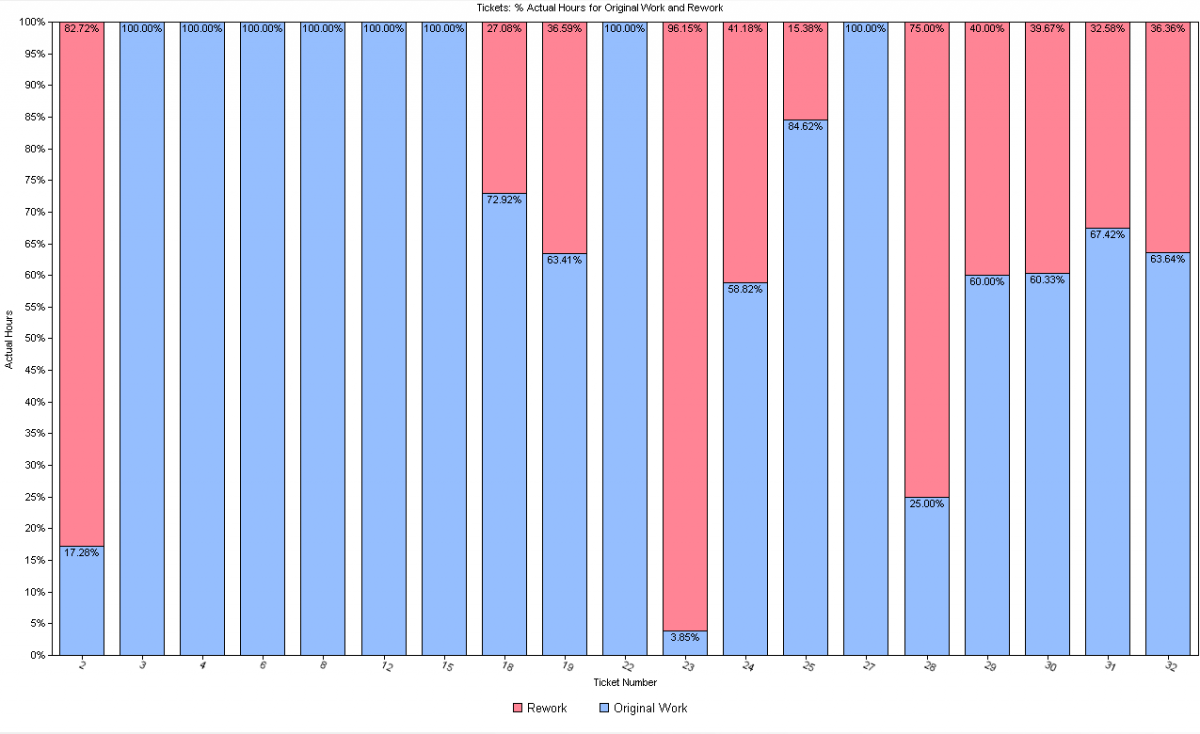 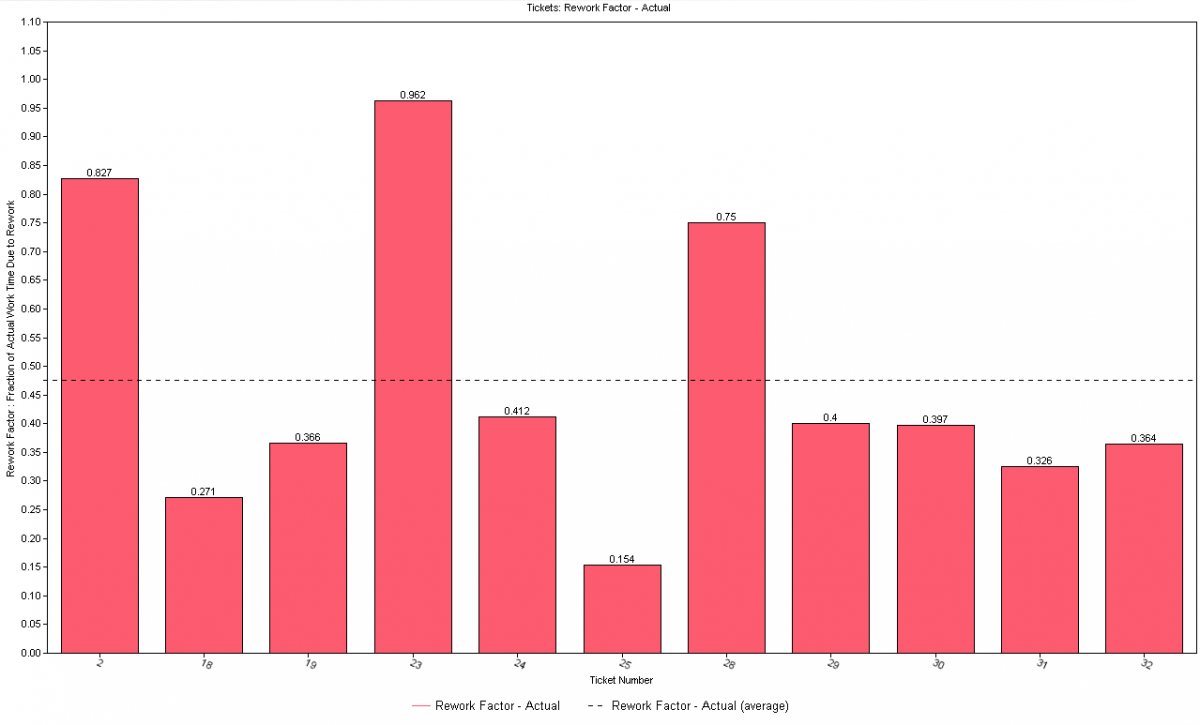 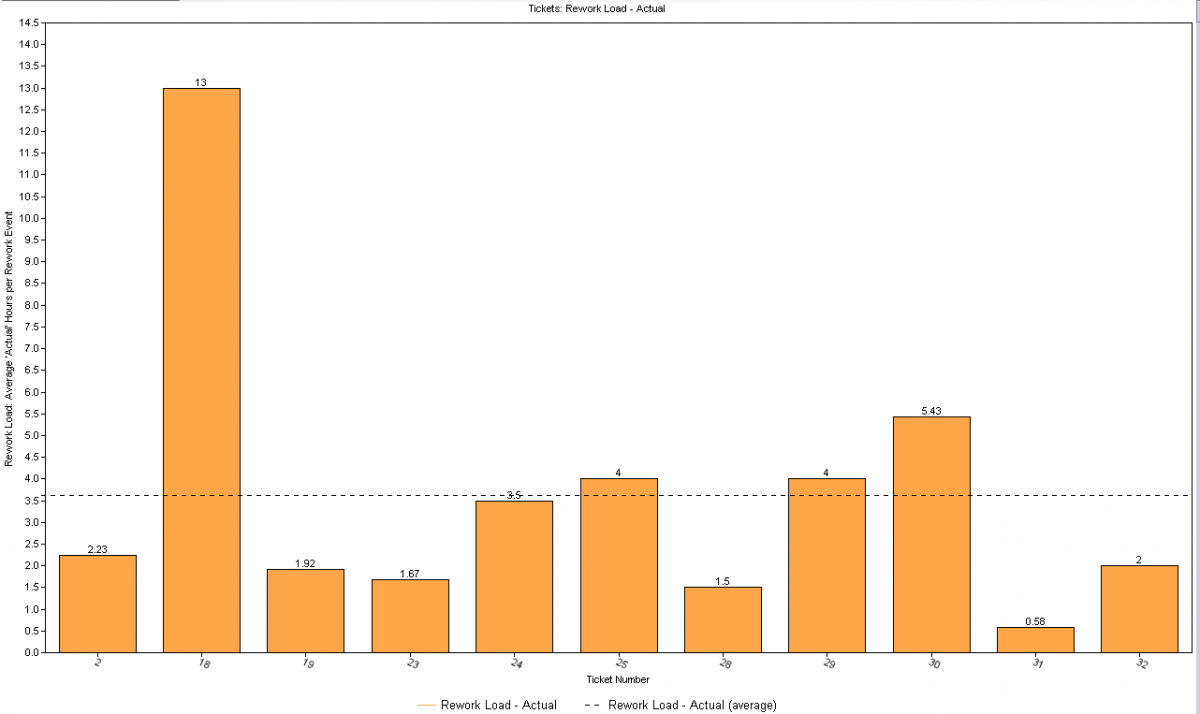 We have looked at just a few of the ways you can customize TestTrack to help you better manage your software projects. You now have metrics to monitor and manage rework associated with project and its relation to total project effort. You have seen how you can create effective Live Chart reports to display this information for review and assessment.

There is much more you can do to tailor TestTrack to better serve your project management information needs. In another article, Add Story Point Metrics to Your Agile Software Project Toolbox, we look at how you can apply time-tracking metrics to Agile projects.