If you are on a software development or testing team, do you ever find yourself asking: What build files need to be updated? What features are ready for testing? Is this a known issue? Or do you keep hearing, “That’s a known issue; we don’t test that feature.” If your answer is yes, then you will appreciate the value of release notes. 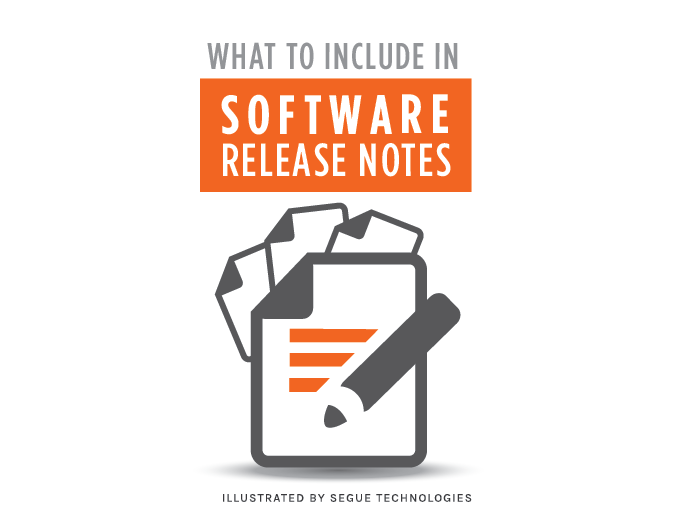 1. They explain what changes, deficiencies and defects were addressed in a product release

2. They inform the reader about installation and deployment.

The audience for release notes can be testers, support staff and management. There are generally two types of release notes:

1. Internal for Management, Testers, DB Administrators – summarizes the changes made so the project team is all on the same page.

2. External for the Client and End Users – summarizes the changes made so users can see how development has affected the way they interact with the system.

As a tester for Segue Technologies, I’m going to focus on Internal release notes and how they support a development project.

The Benefits of Release Notes

Release notes are a pivotal piece of project documentation that aren’t often created. They can increase your project’s efficiency by establishing expectations. By including a list of recognized complications, you enable Quality Control (QC) to center their testing efforts on relevant features that were related to testing. Additionally, you can refrain from wasting valuable QC hours investigating and reporting problems that have already been identified. When such information isn’t provided in release notes, jarring speed bumps in the project’s life cycle often occur as the team pauses to sync up information.

Since there are many things that need to be included in release notes, a template can be a hassle-free way to generate your notes with all the information that people need to know. Release notes should be simple, concise, and they should, at minimum, include the following information:

A good set of release notes can help make a release cycle smooth and more efficient. A lack of or insufficient release notes can lead to delays, repetitive reporting of issues and increased project hours. When you begin using release notes you will quickly see the benefits. Remember to ask your readers for feedback. You’ll find your project runs more efficiently when your audience isn’t left wondering what, how, and when things are happening.

Need help? Tell us what you need!