Written by LaTonya Pearson on September 11, 2015

Before Segue releases an application, it undergoes a thorough testing process to ensure that the app is working in the manner in which it was intended. There are four main stages of testing that need to be completed before a program can be cleared for use: unit testing, integration testing, system testing, and acceptance testing. Why not include Regression testing? Regression Testing is not a separate level of testing; it is just a type of testing that can be performed during any of the four main software testing stages. 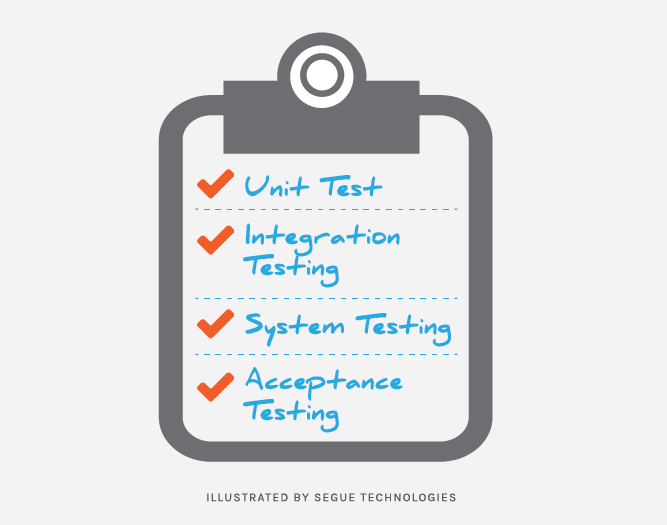 During this first round of testing, the program is submitted to assessments that focus on specific units or components of the software to determine whether each one is fully functional. The main aim of this endeavor is to determine whether the application functions as designed. In this phase, a unit can refer to a function, individual program or even a procedure, and a White-box Testing method is usually used to get the job done. One of the biggest benefits of this testing phase is that it can be run every time a piece of code is changed, allowing issues to be resolved as quickly as possible. It’s quite common for software developers to perform unit tests before delivering software to testers for formal testing.

Integration testing allows individuals the opportunity to combine all of the units within a program and test them as a group. This testing level is designed to find interface defects between the modules/functions. This is particularly beneficial because it determines how efficiently the units are running together. Keep in mind that no matter how efficiently each unit is running, if they aren’t properly integrated, it will affect the functionality of the software program. In order to run these types of tests, individuals can make use of various testing methods, but the specific method that will be used to get the job done will depend greatly on the way in which the units are defined.

System testing is the first level in which the complete application is tested as a whole. The goal at this level is to evaluate whether the system has complied with all of the outlined requirements and to see that it meets Quality Standards. System testing is undertaken by independent testers who haven’t played a role in developing the program. This testing is performed in an environment that closely mirrors production. System Testing is very important because it verifies that the application meets the technical, functional, and business requirements that were set by the customer.

The final level, Acceptance testing (or User Acceptance Testing), is conducted to determine whether the system is ready for release. During the Software development life cycle, requirements changes can sometimes be misinterpreted in a fashion that does not meet the intended needs of the users. During this final phase, the user will test the system to find out whether the application meets their business’ needs. Once this process has been completed and the software has passed, the program will then be delivered to production.

As you can see, the extensiveness of these tests is just another reason why bringing your software testers in early is important. When a program is more thoroughly tested, a greater number of bugs will be detected; this ultimately results in higher quality software.