Like all developers, Segue mobile application developers must constantly follow the latest trends and technologies within the industry in order to remain viable. One avenue we utilize is attending local meetups which provide not only useful information but allow our developers to network with other developers and industry leaders. For the past few years, I have been attending the MoDevDC Meetup group, which was created by Peter Erickson. During these sessions I’ve discovered new mobile design patterns, learned about government user privacy mandates, and met many enthusiastic and talented developers. The meetup group, which celebrated its fifth anniversary in January, is just a small part of Erickson’s inventory. He also organizes several MoDev conferences and hackathons such as ModevCon, ModevUX, and Wearables + Things – the latter scheduled for October 2014. Mr. Erickson was kind enough to answer a few questions regarding the past five years and the future of MoDev. 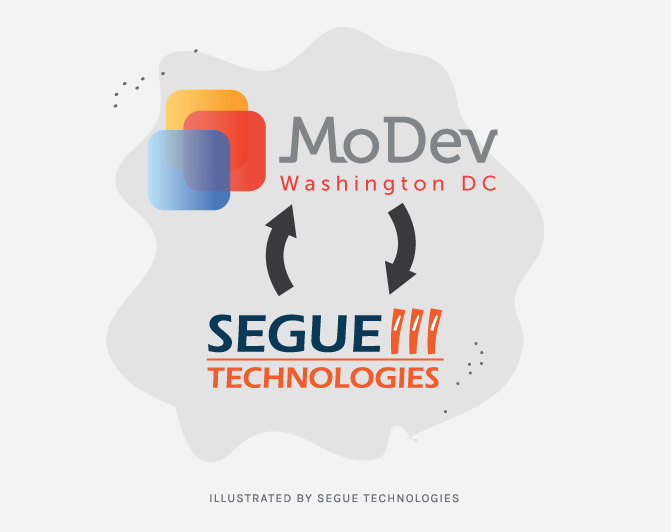 Todd Godbout: What was the rationale for starting MoDevDC?

Peter Erickson: I’ve been a developer and entrepreneur and could see that the mobile space was really heating up in 2008 with the iTunes app store coming online. Technology was moving so fast that I thought it would be great to have a community where the latest ideas and methods could be shared. That’s still our mantra today and all of our events are about the sharing of timely information among peers.

Godbout:  What was your involvement with Mobile Application Development before MoDevDC?

Erickson: I lived through the struggles of getting apps onto phones when the carriers still tightly controlled the process. One application in particular was focused on providing secure voice, video, and data across carriers, Wi-Fi and mesh networks, which was totally unprecedented. For one application we had to spend a couple years in testing on the carrier networks and attend countless meetings with decision makers. It’s comical to think about that now, as tens of thousands of apps are being uploaded every day and approved either instantly or in a matter of hours or days.

Godbout: How have the conferences and Meetup group evolved since the early days?

Erickson: We started out just as a meetup group holding regular monthly get togethers and have evolved to an organization that puts on meetups, full conferences and special events for other companies such as the Amazon Fire Phone event we just produced. Our first meetup was 12 people at a pizza joint in Rosslyn and within months we were hosting 100 person events. We added our first conference in 2011 and had 317 attendees. Last year our largest conference was 750 attendees and we expect to eclipse 1000 attendees this year. Our meetups aren’t huge as that is not our focus. We like to run smaller meetups with focused information that will appeal to actual practitioners. We prefer more meetups and more information sharing and rock solid conferences that are on par with any other event in the world.

Godbout:  Has participation been consistent over this period and do you see some topics being more popular than others?

Erickson: Participation has grown steadily over the past five years and now our community is about 10,000 nationally. What drives that growth is staying focused on the most relevant content at the time. Native app development is our most popular subject followed by UX/Design and then Marketing.

Godbout:  Are specific platforms more popular with your audience?

Erickson: At a broad level, Android and iOS dominate the platform discussion, but our developers love the tools used to build apps as well such as Sencha, Appcelerator, PhoneGap and many more. Windows has a decent following, especially in the DC region where their federal business is strong.

Godbout:  What are your future goals for MoDevDC?

Community – We’re going to continue to produce free and open meetups as that is so important to our core mission of peer based learning. We’re going to work hard to get our other chapters hosting regular meetups as well.

Events – Conferences and special events are going to continue to grow for us. Right now we run ModevUX, Wearables + Things and ModevCon (Formerly ModevEast). We’re likely going to add a gaming conference in 2015 which will give us four conferences a year in this region. We like bringing people from all over the world to DC. You’ll also see more events like the Amazon Fire Phone workshop-those are so fun to produce.

ModevAcademy – This will launch in Q4 of this year. The ModevAcademy takes the 500+ speakers we’ve had at our conferences and makes them available to come onsite for training at any company that wants to schedule them. It takes the traditional training model and turns it upside down. We think this will be a very popular feature as companies are always trying to stay up with the latest trends and keep their teams sharp.