Written by Segue Technologies on December 5, 2013

A lot of fuss is being made lately about whether Microsoft’s relatively new Model View Controller (MVC) technology should automatically supplant .NET Web Forms as the superior web application development technology. There is no clear-cut answer, and rightly so; they both provide different means to reach the same end. Even Scott Guthrie of the MVC development team stated that, “Different customers look for different programming approaches, and a lot love Web Forms and think it is great. Others love MVC and think it is great. That is why we are investing in both”. Below, I have tried to highlight some positives and negatives of both frameworks. This is not an attempt to sway you one way or the other, but rather to possibly provide a broader understanding of why the two frameworks exist as viable options for your company’s development needs. 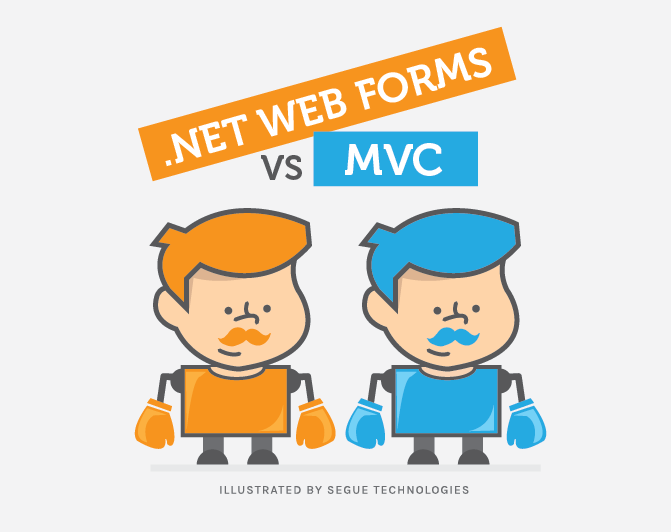 What Are .NET Web Forms?

The idea of .NET Web Forms was born from an attempt to address the ever looming issue implicit in the development of classic ASP web sites. Classic ASP pages housed both the web code and the accompanying code-behind logic in one location: the ASP page. In that way, pages could very easily become long spaghetti-code filled documents that often would become unreadable and unmaintainable. For example, the code to handle page submissions was contained in the same page that would subsequently either redirect the user or need to remain on the current page, but would simply show a different section of the page. This type of event handling was unwieldy.

To address this concern, Microsoft attempted to bring their successful, more event-driven, “visual” windows-application development methodology to web development. As a result, they created a framework that worked more like the popular Visual Basic or Visual C++ desktop / forms development. Suddenly, developers could decouple view code from logic code by having most of their web controls on one page and then have all of the code-behind, “smarts” of the page, contained in a completely separate page.

The MVC design pattern was not invented by Microsoft. Rather, it has been around for upwards of 30 years, having been first introduced around 1979. Since then, the methodology has been implemented by such well known platforms as Ruby on Rails, Apple’s Cocoa and Apache Struts. Only relatively recently has Microsoft added the MVC design, building atop the .NET framework. As a result, .NET developers have the option to develop applications within the existing .NET world they already know but can eschew the lack of overall control offered by the drag & drop of Web Forms. With MVC they can embrace the same separation of concern (SOC) paradigm that has already proven to be successful in other frameworks. Admittedly, not all MVC implementations are exactly the same, with slight differences existing between the different frameworks. For example, Microsoft’s implementation of MVC more closely resembles Rails and Django rather than either Apple’s Cocoa or even the original implementation of MVC, Smalltalk-80.

No one solution is an absolute better choice than the other. The application framework should be chosen based upon the needs and resources of the company doing the development. If you have a development cycle that requires faster than expected turnaround, then Web Forms might be the best option for your company. If your development project has the time, money, and energy to develop an application from the ground up then MVC could potentially be the better option. Again, neither framework is the definite best option, but one could potentially be a better for your development team structure and resources. Segue has extensive experience with both frameworks and would be more than happy to help consult on your development decisions.