Written by Segue Technologies on December 15, 2015

One of the questions we at Segue are often asked by our customers is, “Which platform should I build for first, Android or iOS?” There are many different aspects to consider when answering this question. To answer it fully, we’ve brought together two of our mobile application developers: Geoff Bender, our lead iOS developer, and Mark R. Andrachek, Jr., our lead Android Developer. 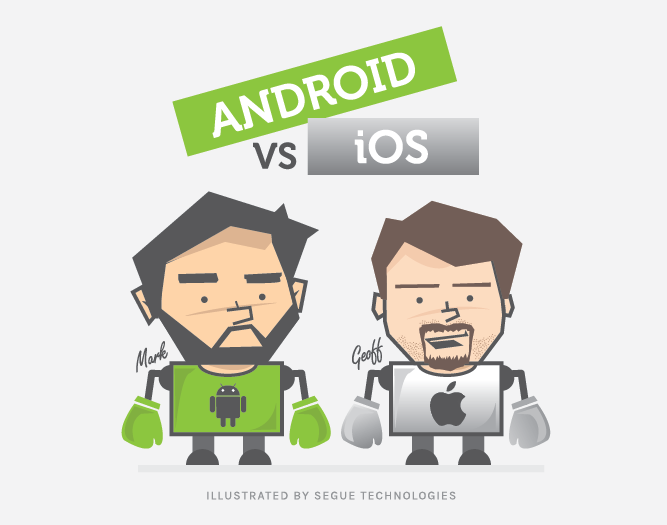 Just how many users are there in each ecosystem and how many devices are there in existence? How has this been changing over the last few years? Where do you see this going in the future?

Geoff Bender (Lead iOS Developer): People often ask who is winning the market share battle but it’s really difficult to answer that question. In the PC world, market share used to translate directly into financial success but in the mobile market it appears to be the opposite. Android appears to be winning the market share battle at this point but iOS users appear to be spending the most money on apps. This may be due to Android market share being stronger in relatively lower income countries or possibly because Apple consumers tend to spend more money on devices, leading to more money being spent on apps. If you plan to profit from your app, iOS would probably have the biggest impact on your bottom line.

If you plan to distribute your app for free and wanted to reach the widest possible audience, especially outside of the US, than perhaps Android is the way to go. They’re really dominating the world market at this point. There have been some studies that speculate that customer loyalty to Apple is going to win out over time and Apple will command the majority market share within the next several years, especially as they aggressively move into China, but it’s almost impossible to predict that sort of future.

Mark R. Andrachek, Jr. (Lead Android Developer): Android currently dominates the global smartphone market, with about 80% of the market and well over 1 billion users. This makes Android the most popular operating system on the planet. Apple likes to toot their own horn about their high  adoption rate for new OS releases – but to put that in perspective, the number of users just on Lollipop (Android 5.x) eclipses the total number of iOS users.

Depending on who is doing the measuring, Android has eclipsed iOS in web traffic as well as advertising-based revenue. However it still lags slightly behind iOS in terms of app sales revenue, with iOS users being more likely to spend money on apps (unless you include 3rd party app stores).

Check out Round Two: Software and Hardware Options.

Looking for more information on Mobile App Development? Download our eBook Planning Your Mobile Application below: