Written by Kevin Benore on September 9, 2015

On July 2, 2015, ColdFusion celebrated 20 years as a language and a product. It is only a few months younger than its big brother, Java. Despite its longevity, every year for at least the past 15 years someone with keyboard loves to predict ColdFusion’s impending death. And every year, those of us in the development community either sigh or laugh at the prediction. The same general selling points that made CF a strong contender 20 years ago still apply today, except now CF can do a heck of a lot more than it could back then. I am by no means a ColdFusion elitist, as I believe there are many wonderful programming languages in use such as Java, .Net, etc. In fact, here at Segue Technologies we have a full complement of developers in all of the major languages (for more information check out our services page). However, there is something unique about ColdFusion. ColdFusion is set up to make it possible for a novice to rapidly pick up, a junior level developer to code efficiently and quickly, and for senior level developers to explore advanced topics similar in other languages. In other words, it is useful for any developer at any level. 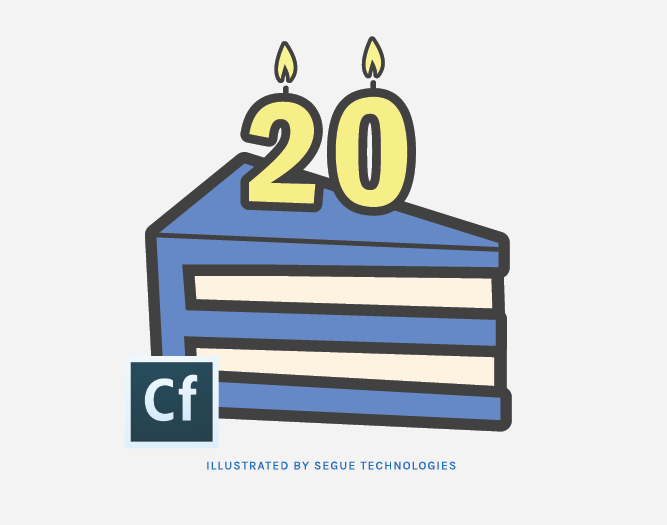 Why Does ColdFusion Get a Bad Rap?

First, like every other language, ColdFusion is developed by humans and sometimes people refuse to grow in their language skillset. They take on the role of developer, they reach a certain level of proficiency, and then they make a conscience decision to stop learning. Whether or not their employer gave them opportunities for continued education—they’ve stopped learning. As a result, I think there are a lot of bad developers out there and smaller companies and institutions can have difficulty weeding out these poor performing developers. It often takes a specialized recruiter or- like in Segue’s case- other advanced developers involved in the hiring process to assist in finding the good developers.

Secondly, ColdFusion is not only a language (known formerly as ColdFusion Markup Language or CFML) but it also a product developed and sold by Adobe. Because it is largely marketed to the enterprise, many bleeding edge features that are released quickly to other languages come more slowly for Adobe’s ColdFusion. While there are a few Open Source CFML products out there, they tend to take their lead from Adobe in order to achieve maximum compatibility. With this, ColdFusion can sometimes feel like it is behind the times when it comes to the latest features. Sometimes Adobe will make a strategic choice in order to sell more licenses, introduce a broader group to the community, or make an unpopular change to some aspect of ColdFusion’s design- in many cases outraging advanced CF developers. While this type of in-fighting can hurt the language, Adobe must continue to be committed to listening to their community, otherwise these frustrated developers could become former ColdFusion users.

Neither of these problems are unique to ColdFusion. However, Adobe ColdFusion is a product that people pay for. Other languages like Java, .NET, PHP, etc. are “free” to use but are often just as expensive as ColdFusion when you consider development training, deployment costs, and support. Though when considering the return on investment, many business decision makers look at the upfront costs first and do not consider the other costs associated with developing in any language.

The Future of ColdFusion

ColdFusion’s roadmap was released back in 2012, showing product development through ColdFusion 12 with product support extending to 2022. We are currently on version 11 of the product, so it is a good sign that Adobe is still planning future development. Another good sign is Adobe’s commitment to its own development conference. When the premier development conference Adobe Max stopped focusing on web development and more on their creative products, Adobe launched ColdFusion Summit in 2013 and continues to host that conference annually. Even if Adobe decided to discontinue support for CF, the community still has open source alternatives that could be viable options for many years to come. These include Lucee, Railo, and BlueDragon. But hopefully Adobe will release an updated roadmap so we can see the future of ColdFusion beyond version 12.

The Future of the ColdFusion Developer

For those planning on developing past Adobe’s current support year of 2022, do not fear that if ColdFusion were suddenly going to die you’d be out of a job. For one, it is unlikely ColdFusion will die anytime soon since the product keeps increasing its customer base year after year. Another thing to consider is that businesses and government institutions typically adopt new technologies at a slower rate than some of us cutting edge geeks. So long after the death of a product, you can be sure there will still be businesses and governments still using it. Windows XP was still in use on about 250 million computers as of April 2015 despite support officially ending April 8, 2014. So ColdFusion developers take heart, you could have a thriving career for the next 10-20 years.

However, there is no reason that a developer should be stuck in one language. I would suggest picking up another language or two over the next 5 years (Have you checked out Lynda.com?). Java seems like the obvious choice, since ColdFusion is built on top of Java. You can use your newfound Java skills to complement your ColdFusion development. There are a ton of Java developers in the wild, but if you have an advanced skillset in ColdFusion, with proper motivation, you can get to that skillset level in Java with time and experience on projects.