Written by Derek Robinson on February 3, 2014

Remember paper maps? From the mini atlas and DOT maps, to the large single spring classroom educational pull down maps; paper maps used to be the standard. However, advancements in technology have changed the way we view geographical data, specifically maps. Instead of using a classroom globe to find a location, we can now use the Google Earth application not only to locate it, but to view images of that location as well. This advancement in spatial technology, specifically the visual component, continues to progress, and with it, the variation of it’s applications. 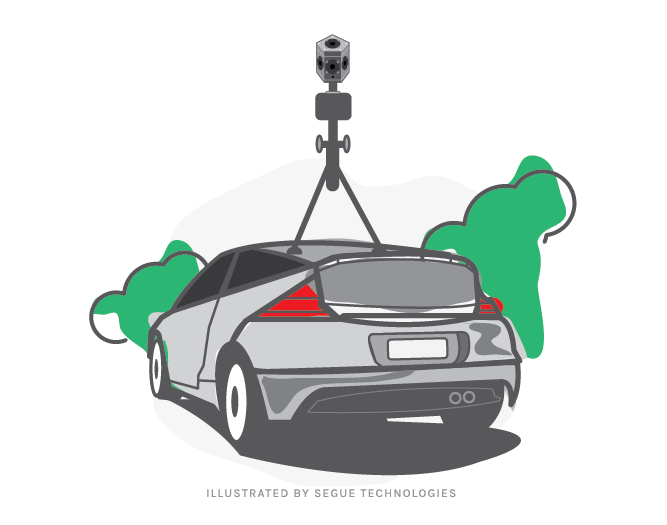 The question I am most often asked at a stop light is, “Will I be on Google Maps?” This is because my car is equipped with the new 360° degree video capture technology from Point Grey Research. It is a technology that many people associate with Google Maps (Street View), and indeed, that is one of its purposes. However, through my work with the United States Marine Corps, I have a more applied use of this technology.

Unlike Google Maps, the assets that are being captured using this technology are not for public viewing. This work is being done to assist the Marine Corps in ensuring their training facilities are used in a more effective and efficient manner. Training units are able to pre-plan their various field and range exercises using a secured specialized web application that locates and highlights the various installation assets captured using this video system. The video allows for a “boots on the ground” view and can be especially useful for personnel unfamiliar with the size and or configuration of an installation’s training facility.

The camera system, called Ladybug3, that is used to capture 360° images includes six two megapixel cameras that enable the system to collect video from more than 80% of the full 360° sphere, and an IEEE-1394b (FireWire) interface with locking screw connection that allows JPEG-compressed 12MegaPixel resolution images to be streamed to disk at 15 frames per second. In laymen’s terms, this technology allows the Marine Corps to view their facilities as if they were viewing them in person – whatever the Ladybug3 lenses captures will be viewable to the customer via the web, smartphone, or a variety of video players.

In two years’ time, I’ve seen this technology move from still pictures to 360° immersive video of installation assets. This improvement in technology has allowed for advancements in training programs and personnel. Segue Technologies looks forward to continuing to assist the United States Marine Corps in this collection effort.